Discover the most beautiful Kauri forests in New Zealand

New Zealand is the land of Kauri trees. In New Zealand there are still some representatives of the Kauri trees and many beautiful places where you can see these forest giants.

What questions do we answer in this article?

A Kauri tree belongs to the araucaria family of plants. Besides the name Kauri tree, they are also called Kauri spruces or Kauri pines. The Kauri tree is evergreen and very large with a spherical crown. The largest known Kauri tree in New Zealand is Tane Mahuta, also called the god of the forest. It is located in Waipoua Forest in Northland. His exact age is unknown, but he is estimated to be 1250 to 2500 years old. It is the largest known Kauri tree. Tane Mahuta is 51,2m tall and its circumference is an impressive 13,77m which corresponds to a diameter of 4,4m. The trunk height from the ground to the base of the crown is 17.68m. Interesting with the Kaur trees is the fact that these have their first branches only in large height. At the same time the Kauri is the largest tree species native to New Zealand.

Beside Tane Mahuta there are other Kauri trees in New Zealand, which we explain in the next section.

Where else are there Kauri trees

All Kauri trees in New Zealand are located on the North Island. The largest number of Kauri trees are found in the region called Northland, i.e. above Auckland to Kaitaia.

But also on the Coromandel peninsula there are still some remaining Kauri trees, these are less touristy and therefore worth a look. We'll list the best spots for you here:

What Is Kauri Dieback Disease

Kauri Dieback Disease is a dangerous and highly contagious disease for Kauri trees. In detail, the Kauri tree is attacked by a microscopically small fungus-like organism during Dieback Disease. This organism is capable of infecting kauri trees of all sizes and ages. The pathogen is called Phytophthora agathidicida (PA) and lives in the soil and attacks the Kauri roots. It damages the tissue of the roots which transport nutrients and water into the tree, so the tree starves effectively. Almost all infected Kauri trees die over time. The pathogens and bacteria are invisible, unfortunately there is now no treatment available against this disease.

What there are however are methods to prevent the spread of Kauri Dieback Disease. These are visible on hiking trails and in many places in the form of purification stations. Please use these stations at every opportunity to give future visitors this great opportunity. 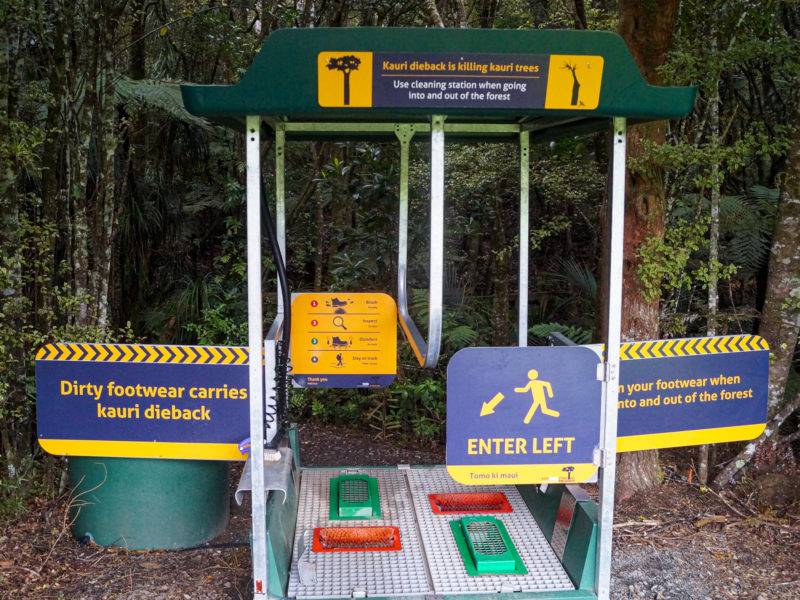 What importance do Kauris have for the Maori

Kauris have an important meaning for the Maori. They are the symbol of Maori culture for health and the general condition of forests and people. Therefore the value of Kauri trees and Kauri forests for the Maori should not be underestimated. In the history of Maori creation there is the following story. At the beginning of the world the god Tane lived together with his siblings and parents in darkness. Tane and his siblings separated their parents, Ranginui (the Heavenly Father) and Papatuanuku (the Earth Mother), and created light and life to exist and grow. Thus began time, the world of light and the title Tane Mahuta, God of the forest and all its creatures.

Kauri is known to Maori as Te Whakaruruhau, the great protector of the forest, and refers to the many species that can hide in Kauri trees. Many large kauri trees were named and worshipped as chieftains of the forest.

Maori also associate the Kauri tree with whales (Tohora). According to Maori genealogy (Whakapapa) Kauri and Tohora are brothers. It is believed that Tane (god of the forest) gave the whale to Tanaroa (god of the sea), giving Kauri trees their unique scales for bark.

Maori elders today often combine whale stranding’s with the fights of the Kauri tree, which is susceptible to and suffers from Kauri Dieback Disease.

What was Kauri wood used for

In New Zealand the wood of the Kauri tree was formerly used to build boats and houses. Especially after the arrival of the European settlers Kauri wood was used for various purposes. Nowadays Kauri wood is mainly used for furniture. Kauri wood is easy to process and can be compared to pine wood in terms of its processing properties. Due to its structure, however, the wood is not comparable to industrially produced solid wood. Even after careful drying and correct storage, even finished Kauri wood objects or furniture can move or crack. So, every piece of Kauri wood is unique. The wood has a brown-red colour. With sanded and finished wood, the surface can shimmer depending upon the incidence of light partially gold-coloured. 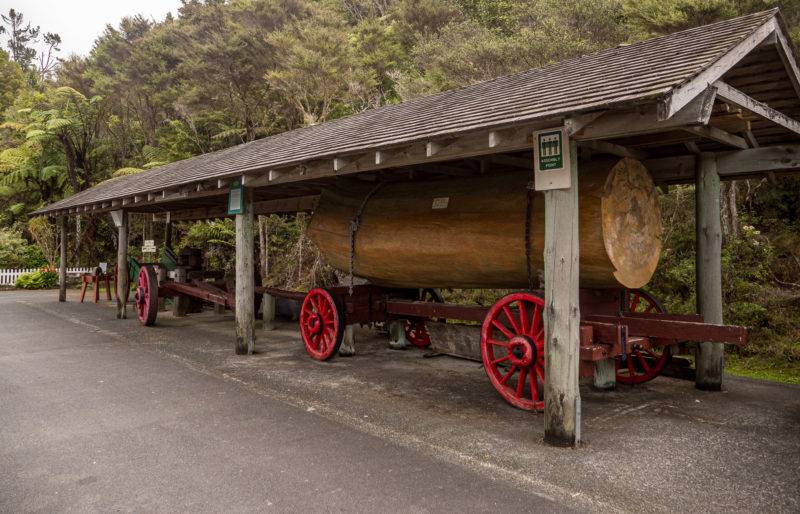 Large piece of a Kauri tree after logging

What is Kauri gum

The kauri gum drips from cracks in the bark of the kauri tree and hardens on contact with air. The gum lumps formed in this way reached the ground and were covered with soil and plant parts and finally fossilized. Other lumps formed in places where new branches developed or trees were damaged.

The colour of Kauri gum depends on the condition of the tree and the time it was stored in the ground. The size of the lumps found can also vary greatly. Small nuggets, known as chips, are more common in swamps. On the slopes of hills, larger lumps were found. The majority of the lumps reached a maximum size of one acorn. Rarely there are also larger lumps, the largest known finding had a total weight of about 25 kilograms.

Kauri gum resembles amber in some characteristics. However, while amber is several million years old, fossil Kauri resin is only a few thousand years old according to initial findings.

What is Kauri gum used for

The Maori used the gum of the Kauri tree for many purposes. Fresh resin was used as a kind of chewing gum. Older gum was softened by soaking and mixing with the juice of the thistle. The resin is highly flammable and served as a firelighter or was wrapped in flax used as a torch. Combustion residues mixed with animal fat were used as pigment for moko tattoos.

Kauri resin was exported to London and America in the mid-1840s. At that time, it was used as an adhesive for shipbuilding and as a fire starter. Since the resin mixes more easily with linseed oil than other resins, 70% of the varnish produced in England in the 1890s was based on Kauri resin.

From the 1930s, the market for Kauri resin declined as synthetic alternatives emerged.

Auckland was the largest exporter of Kauri resin between 1850 and 1950.

What Kauri souvenirs do exist

In addition to various smaller souvenirs that contain Kauri wood, such as key rings and earrings, there are also larger objects such as tables or other furniture made of Kauri wood in so-called wood studios. These Wood Studios are distributed throughout New Zealand. Known are for example the Matakohe Kauri Museum in Northland, or the House of Wood in Hokitika.

Do you still have a specific question, comment or idea about this article? Then we are looking forward to your comment here under the article. Have fun in New Zealand!

We run this blog so you can have a great time in New Zealand. All the articles and the annual visit are not self-financing. Therefore we are happy about your support. Follow this link, you can support us once or on a monthly basis.

We are pleased to receive a tasty coffee (or multiple if you like) and raise a toast for your participation!

Even if it is not widely known. This blog is a full-time job and we would like to help you in the future as well, but this is only possible if you are willing to support us in exchange for your help.

If every visitor donates 1€ per year, our business would be secured for long times. Therefore we count on your support!

We say THANK YOU and wish you a great time travelling New Zealand! 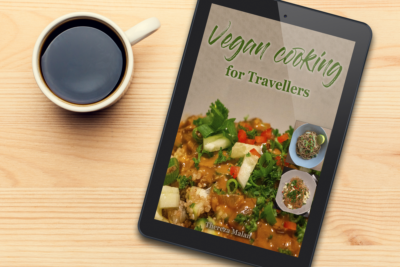 Project New Zealand was founded in 2016 and is now run full-time. You can find more information about the team here.