A long day at the Richmond Library and a restless night

After leaving the Takaka Hills we drive back to Richmond and spend another day at the local library. Enjoy electricity and WLAN and work off as many as possible.

From Richmond we drive towards Picton and stop at Brown River Reserve. As it is still raining permanently and our van is leaking at the trunk, we cook for a short time and go to bed early. Because of the winter the sun sets quite early and we use the time with artificial light in the van to listen to podcasts and read them in peace and quiet.

As our sleeping place is located directly at a river, the night is quite restless as we watch the water level from time to time to get an early warning if the river is rising too high. Fortunately, nothing happens and so we can leave the next morning in the dry.

As a small stopover before Picton we want to visit the French Pass. The French Pass is picturesquely situated at the sounds and my memories from 2017 are very positive. All the more I am looking forward to visiting the site again and to paying the dolphin a visit again.

The French Pass is a strait with dangerous shoals and according to a legend there used to be a dolphin that guided the boats through the strait. A monument has even been erected to this dolphin. At the harbour at the French Pass we sit in the van and have breakfast before we drive back. 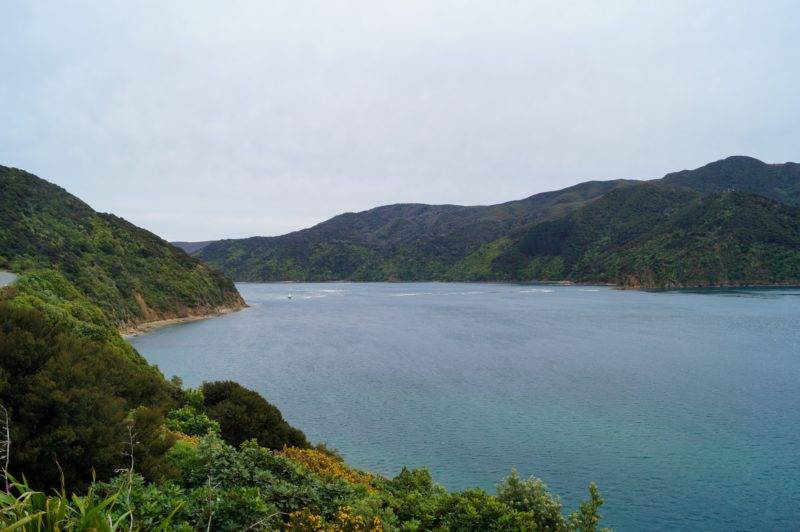 From the French Pass we take a small detour past Elaine Bay. Elaine Bay is also in the Sounds and has a picturesque jetty which is located directly at a cheap DOC camping site. But because it is still quite early, we make our way towards Picton. 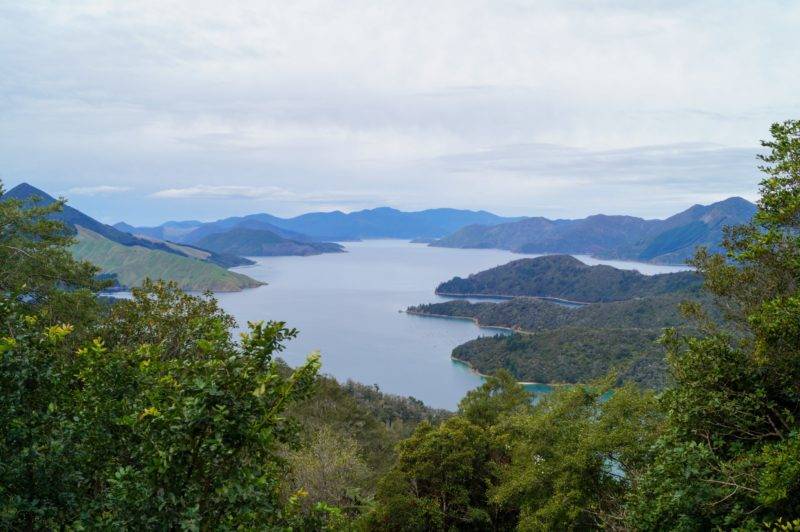 Near our sleeping place from the previous night we want to have a look at another Freedom Camping Spot. When we arrive there, we can hardly believe our eyes, because Philipp's old van is also there. This time it is daytime and Philipp addresses the new owners, Franzi and David. After a short moment of disbelieving amazement, they laugh and Philipp shows them photos from 2016. The van's clear distinguishing feature is the individual painting.

Together we have dinner with them and play cards afterwards. It is getting colder and the starry sky invites for some more great photos. 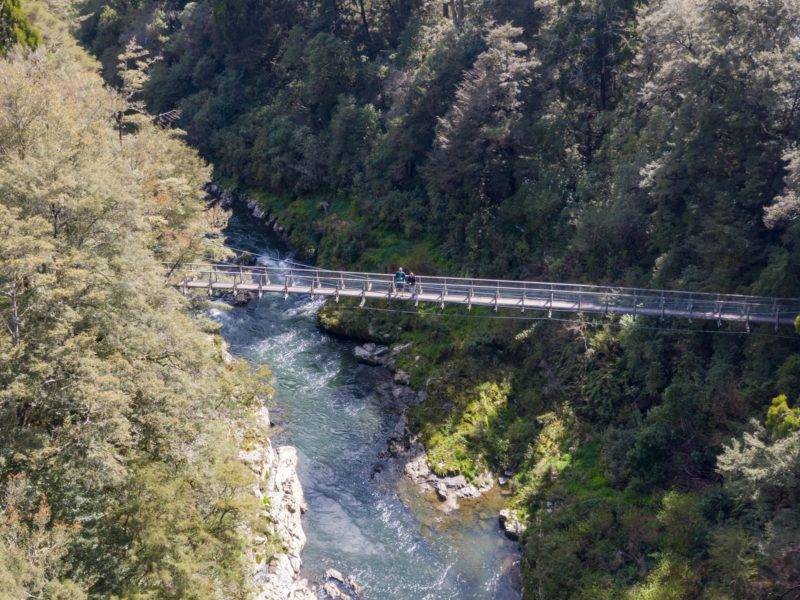 Swing bridge over the Pelorus river

The next morning Philipp and I leave for Picton via the Queen Charlotte Track, we have an appointment at the Piwaka Lodge and meet Bruce, who has taken a liking to Backpario.

Picton and a Pub Insider

We arrive in Picton, find the hostel and park our van. After checking into our room Bruce invites us to a pub and we accept the invitation. Currently the Rugby World Cup is in Japan and Bruce is a rugby fan who never misses an opportunity to watch a game in the pub.

A funny detail on the side, we find out that I have known Bruce since 2015. At that time, I was already a guest in another hostel that he managed. We only find out by visiting the pub, because the pub is not a tourist pub and I was surprised, because I was already there in 2015. Just on Bruce's recommendation for a good and fair pub. The pub is called Crow Tavern and offers a decent assortment of alcoholic drinks. As one of the few pubs there is even a non-alcoholic beer, a rarity in New Zealand.

In the evening we spend time with the other backpackers in the lounge of our hostel, quickly other travellers find each other and we play cards together. Uno with international cast so to speak.

Sunrise in Picton and a visit to Lochmara Lodge

I get up early in the morning, because my goal is to photograph the sunrise at the harbour. Saskia, who I met the evening before, has agreed to come along and watch the sunrise with me. At 5.30 a.m. we leave the lodge and after a few minutes we are at the view point with a view to the harbour. After I set up the camera, we make coffee and enjoy the view of the harbour with the very slowly rising sun. Around 8 am we are back at the hostel, because Saskia is leaving today and Philipp and I have another appointment. 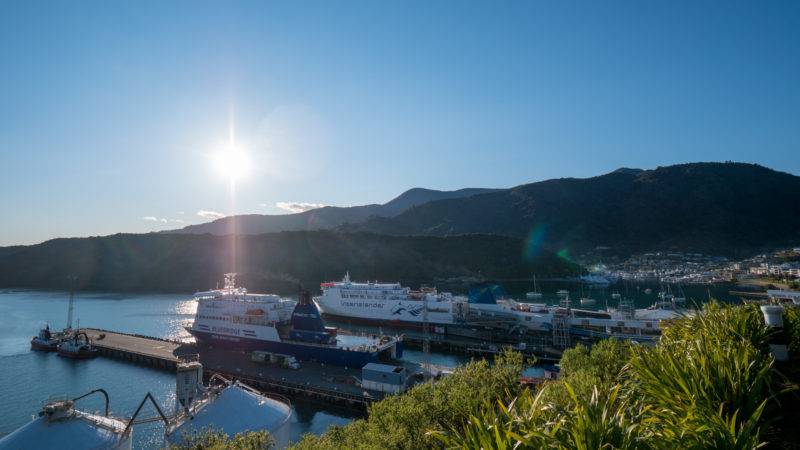 Today we are invited to visit Lochmara Lodge. The lodge is located about 30 minutes by boat from Picton in Lochmara Bay. Lochmara Lodge includes a café, a couple of guest rooms with great views, the possibility to go kayaking or stand up paddle boarding, a wildlife station with various birds and reptiles, and a selection of llamas and Kunekune pigs. 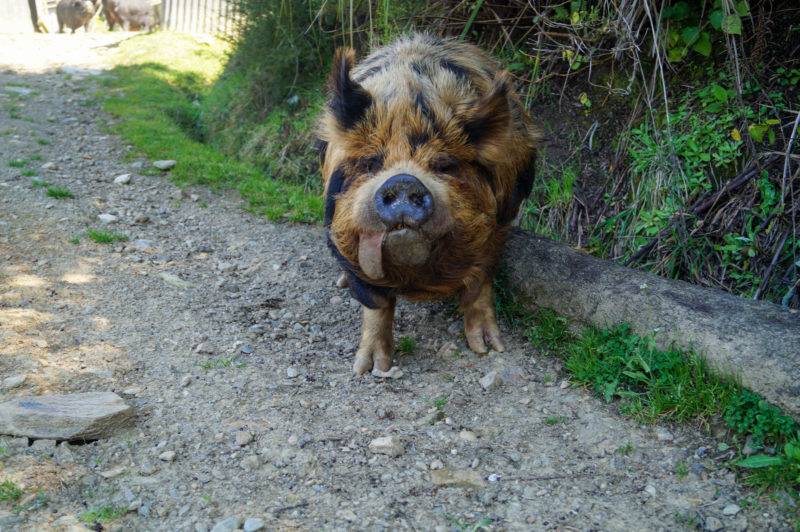 There is also an underwater observatory that has become my personal favourite. So, you can comfortably observe the underwater animal world and even stay dry. 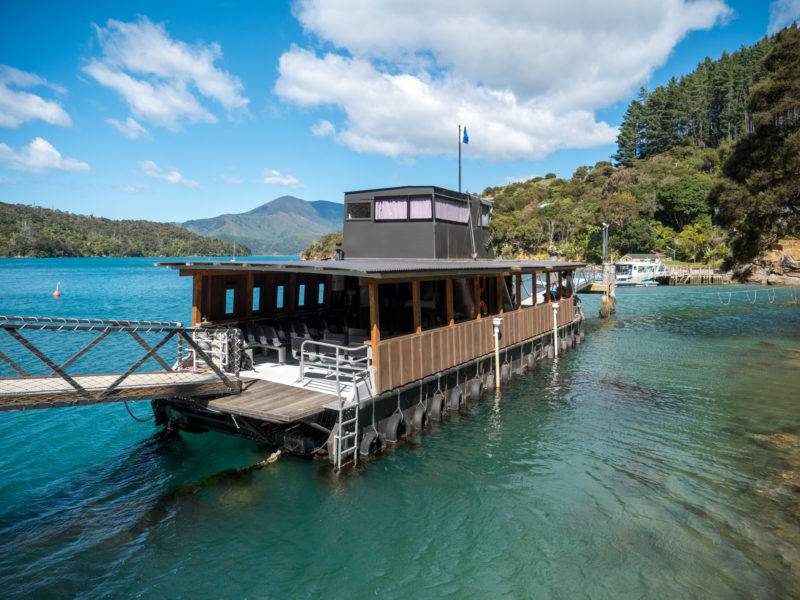 After we have had a good look at everything, it is just the first day of the new season, we sit down in the café and have a coffee while we look at the water. You can also find some photos from Lochmara Lodge on our Instagram Channel. 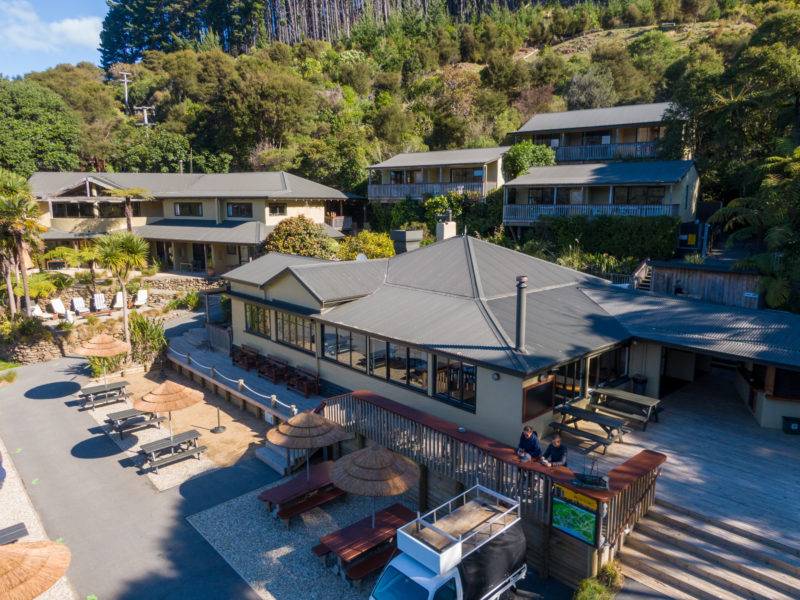 The Cafe at Lochmara Lodge

After we are back in Picton in the evening, Philipp and I book the ferry for Friday to spend another day in the hostel, because it's rugby time again and the All Blacks (the New Zealand team) are playing at a very bad time and Bruce has organized that the pub is open longer just for us. 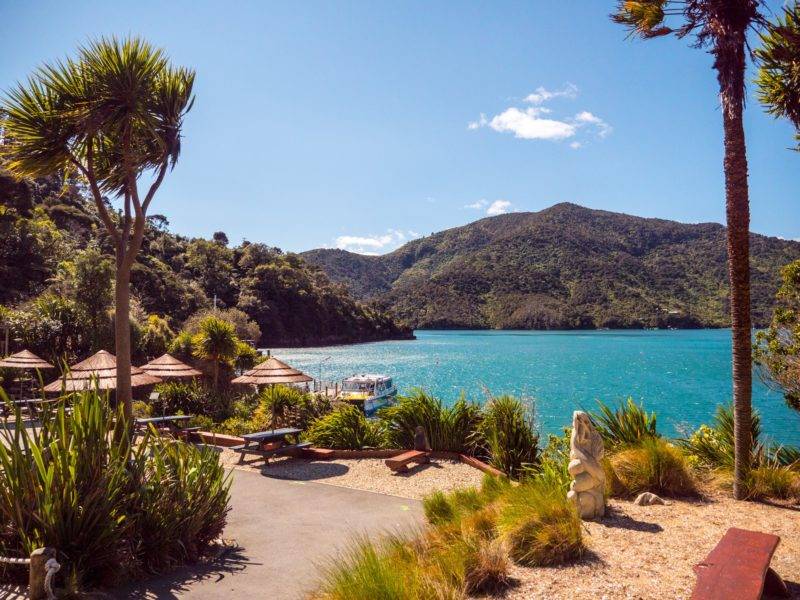 View from the rooms at Lochmara Lodge

The all Blacks win and we go to bed late.

Laundry and some organisation stuff

On a road trip you also have to do some washing from time to time. So, we used the washing machine in the hostel the evening before and put our clothes on the line in the sun. Before we check out to get the ferry, I quickly sort out some of the pictures and videos from the day before from the lodge, because there I took some photos and videos.

While waiting for the ferry we discover Franzi and David again and wave, because apparently, we take the same ferry. On board we have a coffee together and arrange for a common pitch in Wellington at the Freedom Camp of the Evans Bay Marina. 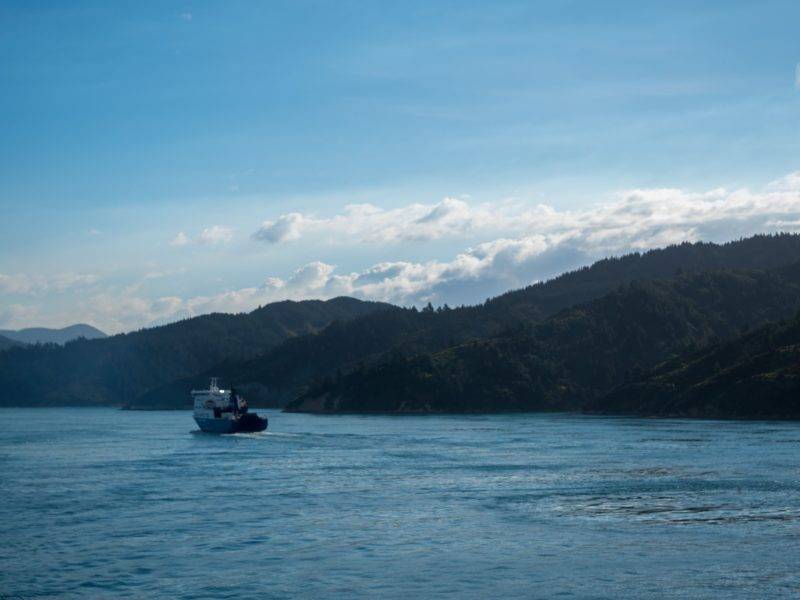 Ferry on the way to Picton

One of the few Freedom Camp sites in and around Wellington. When we arrive in the evening with the ferry, Franzi and David drive directly to the campground while Philipp and I do some shopping. Philipp is responsible for the beverage supply this time and therefore we stop at a New World on the way. When we arrive, we are lucky because Franzi and David have saved the last free place for us and we can park directly next to them. 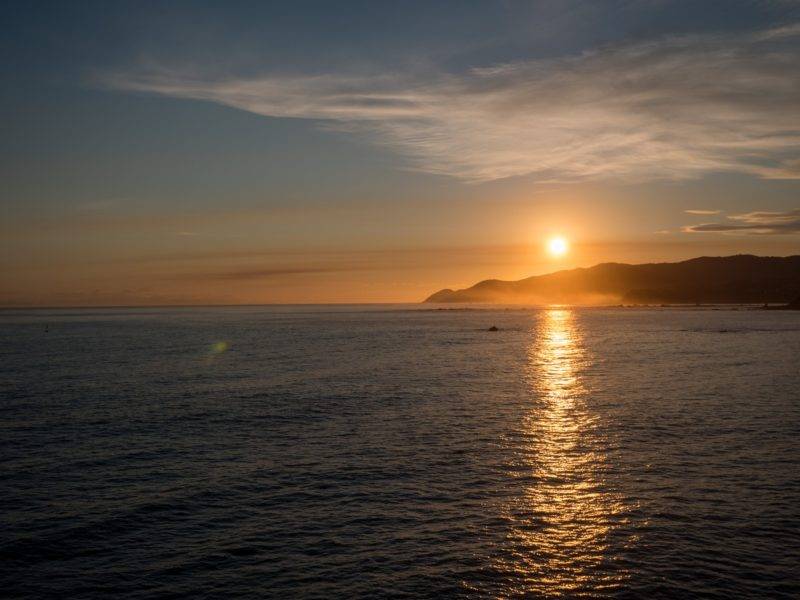 Sundown on the ferry to Wellington

The beginning of a wonderful friendship

We cook together and then sit down between the vans to talk a little bit more and play cards. My stomach is still a little tense from the previous ferry crossing, apparently, I get seasick quite fast and even the ginger sweets only helped a little. If anyone has a tip for this annoying suffering, then I look forward to your comment.

It's Saturday and we're exploring Wellington together. From the harbour we walk along the bay towards the city centre. Our destination today is the Te Papa National Museum and we are lucky, because in front of the museum there is even a fair of the different New Zealand emergency services like fire brigade, police and Co., a man's dream comes true. After a short stroll through the exhibition, we go to Te Papa and have a look at some of the exhibitions. I still find the exhibition about the New Zealanders' deployment in Gallipoli particularly impressive. In a depressing but historically interesting way many facts about the deployment and the bad conditions are explained. Even though I have already seen this exhibition in 2017, I still discover new things and leave the exhibition with an emotional feeling at the end. 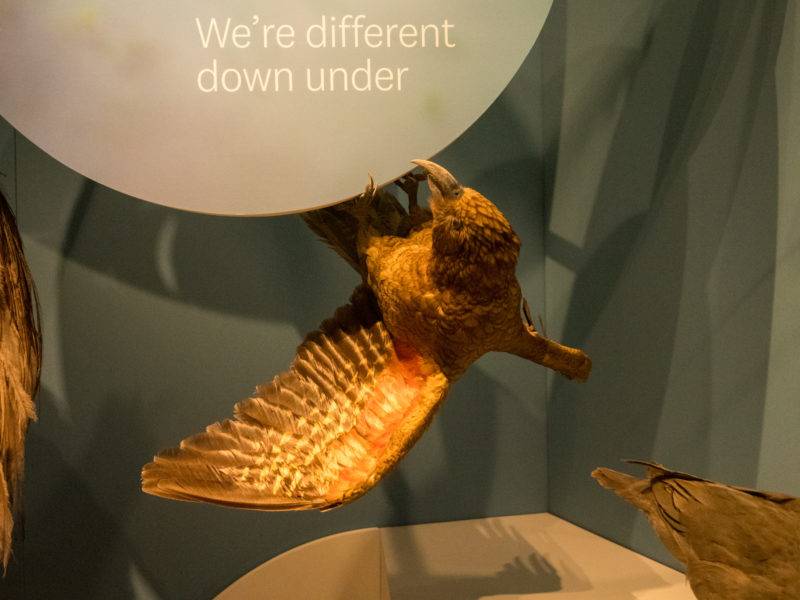 After we have seen so much, we go for a round of fast food with fries and burgers in downtown Wellington. From there we walk through the Victoria Tunnel and back to the harbour, this time we want to cook earlier and play cards.

Summertime in New Zealand and Sunday in Wellington

This night the clock in New Zealand is changed to daylight saving time, which makes the time difference to Germany even bigger, because the time is advanced.

Around noon we take part in a clean-up in Wellington. Since we saw flyers of it yesterday, we are at the meeting point on time and are looked at a little incredulous. Apparently, backpackers are rather seldom at these clean ups. After we collected garbage for an hour in the Victoria district we return, because as a reward we get coffee and cake. The locals are really curious how we came across the event and we learn many new things about the garbage problem of the New Zealanders. Many locals as well as tourists like to dispose of their garbage next to the car and not in the garbage can.

Since it is not far from the district Victoria to the summit of Mount Victoria, we start walking to the summit. From Mount Victoria, one has a great view to the harbour of Wellington with the houses built on the hillsides. Wellington as a city is generally very hilly. As a nickname it is also called “windy Wellington” because of the frequent winds. On the horizon dark clouds come up and we hurry back to the harbour in our vans to escape the approaching rain. After a short break in the van the rain is over as fast as it came and we end the day with dinner and card games. 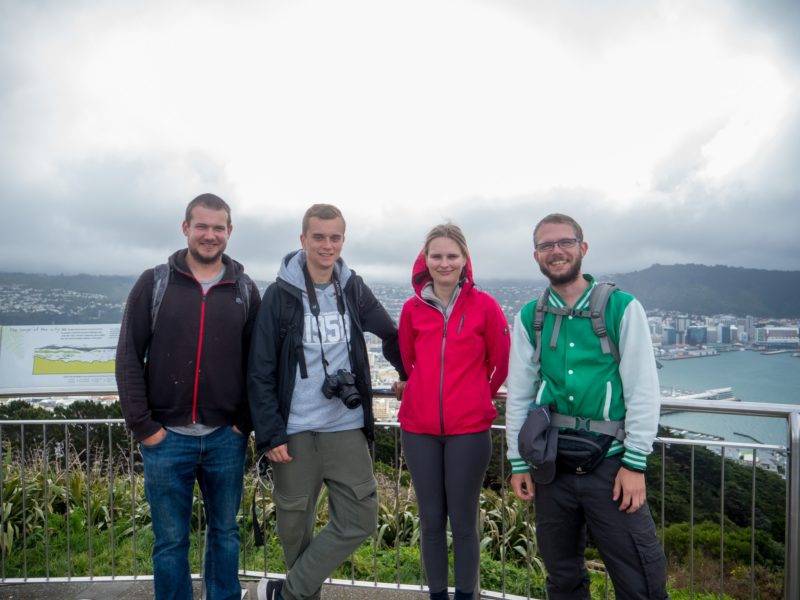 Our fourth New Zealand trip took place from 15.08.2019 – 13.11.2019. Without much planning but with a lot of knowledge we explored New Zealand in our own van and got many updates to already existing knowledge. So, we can continue to be a relevant and important source of knowledge for you as a New Zealand interested person. If you want to get information about New Zealand, this blog is available for free.

Questions, comments or unclear points about this article

Do you have a question or comment about this article? Then write us a comment and we will answer it comfortably here in our blog. Thanks a lot.

We are Kathi & Julian, we travelled a lot through new zealand. Now it is time to share our knowledge with you.

All our information we collected will be shared in this blog. Everything you need to know for your travel to new zealand. You want to go to new zealand for holiday, work and holiday or just a short visit. You will find plenty of information.

Any information missing? Just drop us a message.